Yak: Treasure of the Nomads

Yak is the domestic animal in the Himalayan Regions and Eurasian regions like Mongolia, Siberia, and Russia. It is the most resourceful domestic animal in the world. At present, the yak population is estimated to be at above 15 million in the world and living in less than ten countries like Tibet(China), Mongolia, India, Nepal, Russia, Bhutan, and Pakistan. The 85% of the population of yaks are in Tibetan Regions in China and which ranks highest in the world with its yak quantity.

The yak is huge animal burly legs, thick and long fur, and round cloven hooves. Most of the yaks are black and rusty brown in color but some are the mixed color with black and white on their body. There are some rare golden color yaks are seen and some have a unique graphic on their body. It is said to be a subfamily of Bovine.
It is a domestic animal. They have small ears, wide forehead and with smooth horns of about 25 inches in length with upward curved. The male yaks stand about 1.5 to 1.7meters tall at the shoulder, the females about one-third of that size, and wild male yaks about 1.9 to 2.2meters. Both types have an undercoat of dense, close-matted hair covered by a long shaggy coat of hair. The guard hairs are short on the back, but on the sides can be up to 27 inches in length, extending down near the ground.
The yak is named for the males and the female yak is called Dri by Tibetans. The yak weighs about 450kg and Dri weighs about 250kg. The yak has a four-chambered stomach that allows them to digest foods such as grasses that are too low in available nutrients for many other animals. Especially during the winter season, the grasses are limited as it is covered by thick snow. 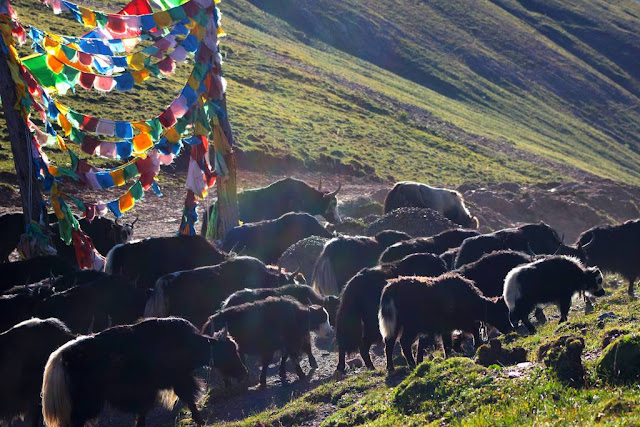 They live at the high altitude of between 2000 to 4000 meters on the Tibetan Plateau and Himalayan Region like Ladakh, Bhutan, Nepal and some parts of Mongolia and Russia. These large animals are well suited to the harsh highlands. They eat grass and herbs.
As scientifically, they have more blood cells than lowland cattle and also has larger lungs. They can’t survive at lower altitudes due to the heat exhaustion. They have a thick layer of fat and lack of sweat glands for the adaptation of cold and high altitude grassland. They are able to cope with the long, cold winter months of violent winds and snowstorms. The temperature can be as low as -25 degree Celsius.

Yak has been probably domesticated in Tibet over 4,000 years ago from the wild yak. There are around ten thousand wild yaks still exist in Tibetan Plateau. The wild yaks are much bigger and stronger than domestic yaks. It lives at a higher altitude about 3000 to 5000metres on the Tibetan Plateau. They can cope with a temperature of -40 degree Celsius. The wild yaks migrate seasonally to the lower plains to eat grasses and herbs. When it gets too warm, they retreat to higher plateaus to eat mosses and lichens, which they rasp off rocks with their rough tongues.
The wild yaks once extended from the Himalayas to Siberia and in the eighteenth century, they were a huge population on Tibetan plateau. At the beginning of the nineteenth century, they were hunted almost to extinction by herders and military personnel. These days there is some handful left in Tibetan plateau and the Himalayan region of Ladakh but they are not effectively protected. They are also endangered because of interbreeding with domestic yak. They are companionable animals but shun contact with humans.

There are more than 10 million domestic yaks in Tibet. Most of Tibetan people are nomads in the early decades as Tibet has vast grassland. So they look after cattle of yaks, sheep, and horses, migrated from one place to other depending on the season.

Yaks are primarily for their milk, fiber, and meat. The domesticated yaks were bred tractability and high milk production. The milk of yak produces other dairy products such as butter, dry cheese also called Chura in Tibetan and yogurt.
The yak fiber is used for making bags, tent, ropes, and a blanket. The yak dung is used for fuel on the treeless Tibetan Plateau by drying it. The skin of yak is very useful for the nomads for making bags and shoes in the early days. These days it is one of the best commodity for commercial. Yaks transport good across the long distance and high altitude places for the farmers, traders, and nomads for their migration. They also used to draw plows for the farmers. It hard to use yaks for long journeys in arid or barren regions as yak never eat grains, they will starve unless they can be brought to a place where there is grass.

Domestic yaks mate in about September; the females may first conceive at about three to four years of age, calving April to June about every other or every second year, apparently depending upon food supply. This gestation period is approximately 9 months. In the absence of more data, wild animals are assumed to mirror this reproductive behavior.
Calves are born about nine months later and nursed for a full year. The mother breeds again in the fall after the calf has been weaned. The calves are initially brown in color and later turns a darker color. After three to four years the calves are capable of giving birth.

There is some yak breed as it crossbred with other cattle such as bull. It is known as Zo for the male and Zomo for the female as fertile with bull and female yak. Yaks may live to more than 20 years.

These days the Tibetan nomads are mostly dependent on yaks for the living because it is easier to look after and less venerable to hunt by wolfs. The population of the wolf in the Tibetan nomadic area is very high to due government banned for poaching wildlife animals, hence these wolves give a hard time for the nomads. The wolfs are less harmful to yaks but the sheep population is totally down especially in eastern Tibet. The sheep are attacked by bears and wolfs and nomads were giving up on sheep. Tibetan nomad is solely depending on the yak for their living as its main source for their economies. In early centuries, Tibetan nomad also uses the tail of yak as sunglasses during the winter season to prevent blindness.  Hence Tibetan people also called Nor for the yak, which means precious wealth.
By tibetexplorer
Email ThisBlogThis!Share to TwitterShare to FacebookShare to Pinterest
Labels: nomadic tent, Tibetan Culture Features, Tibetan nomads, yak, yak meat
Newer Post Older Post Home